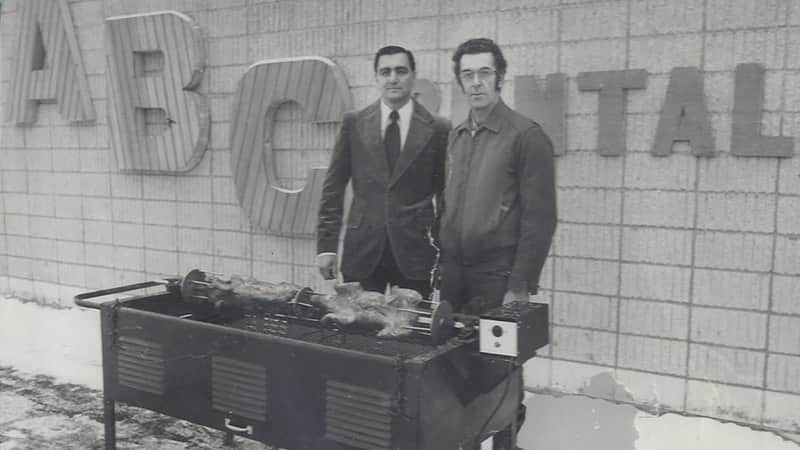 Today, the Twin Cities is full of family-run rental stores: The Pedersons run Highway 55 Rental. The Fitzgeralds are in charge at Hiawatha Ready Rents. The Hejny brothers own Hejny Rental, and brothers Rob and Tim Kellner continue to help ABC Rentals thrive nearly 50 years after their father, Joe, founded the company.

It wasn’t always that way, however.

Joe Kellner was 41 in 1967, and he was tired of working for local TV stations, doing camera and sound work. He had a wife, Mary; three children, $10,000 of borrowed money, and a dream: running his own rental store.

That was all he needed. He started an A to Z Rental franchise, beginning his new career by attending the company-run rental university in Kansas City, and returned to a 1,200-square-foot showroom on a hill in the residential part of town.

Early on, the going was tough. There were days where the only time the showroom door opened was when Joe entered the store to open it, and in the evening, when he’d return home. When customers finally came into the store, they often wanted to buy the tools. People had been borrowing tools from neighbors, friends, or other connections; if they couldn’t borrow an item, they bought it.

But Joe didn’t allow early difficulties to stop him, and the community came around. By 1971, he’d earned enough to buy out his inventory from A to Z and go independent, enabling him to run his business without paying franchise fees.

South St. Paul’s city center was a thriving one, especially during World War II. Many of the heavy hitters in the meatpacking industry had huge plants in the area, making the city the center of the American packing industry. But by the 1960s and 70s, huge plants were on the way out, replaced with more efficient, cheaper, and specialized processes.

The newly-christened ABC Rentals, named to take advantage the alphabetical nature of Yellow Pages listings, found its new home in the industrial part of town. A lot was available that not only provided plenty of property for outdoor equipment storage, but the on-site filling station made diversification into the truck rental business easy.

ABC Rentals became one of the top U-Haul dealers in the five-state area, often topping the list. The truck rental business invigorated the tool rentals as well – newcomers to the area would bring their trucks to the lot, and would find the equipment they needed to work on the nearby homes they’d just bought.

In 1974, Joe could see that his company was getting too big to be run from a filling station. He bought an adjacent property and began construction of the building ABC Rentals uses today. The next year, they moved into the new building, and a South St. Paul community bedrock was established.

While the Kellners stopped renting trucks, they never stopped trying to implement ideas to grow their business.

The Evolution of ABC Rentals

When the first rental software salespeople came to town, Joe was one of the first to try it. Unfortunately, the first company they tried didn’t deliver.

“They couldn’t produce anything decent and walked with everybody’s money – it left kind of a sour taste in a lot of people’s mouths about the whole computer system. ‘Why should we do that when doing it by hand is working just fine?’” Tim Kellner, who had started his own career at ABC by that time, said.

So, while the Kellners were always seeking improvement and open to innovation, Point of Rental co-founder Steve Husbands wasn’t walking into the most welcoming environment when he opened the doors to ABC Rentals in 1993.

“It wasn’t really well-received because of the previous experience. The scrutinization began,” said Rob Kellner. “That’s when Tim and I, who had been a part of the business for a while at that point, said ‘No, this guy – we think that not only can he talk the talk, but he can walk the walk. Let’s look into this.’”

Like their dad before them, Rob and Tim took a trip south to help take the business to a new level. Instead of Kansas City, however, they headed to Arlington, Texas, for a week of training on a software that was then called Point-of-Rental Systems.

They learned data entry. They took classes. And on the final day of their visit, Tim and Rob were left on their own (with supervision) behind the counter of Rental Stop and told to manage the business, using the system.

“Training became baptism by fire, and it went really, really well,” said Rob. “After getting through the end of the day and setting everything up for the next day, we had dinner out on the town, and caught a flight back to Minnesota.”

Since then, the two businesses have grown with each other. When ABC Rentals bought out a distributorship and needed to be able to index the new parts in their system, Point of Rental used that information to build one of their first major parts databases. When ABC Rentals ventured into the mini storage industry, they needed Point of Rental to develop continuation billing. The development team adapted and created ways to manage that effectively within the system.

“The fun part about our growth as a family business is that not only have we grown and benefited from the relationship, but Point of Rental has, too,” Rob said.

On November 11, what would have been Joe’s 91st birthday, ABC Rentals will celebrate their 50th anniversary. Rob Kellner, who celebrates his own 50 years in June, and Tim, nine years his senior, are planning a party.

And who better to throw a party than a rental store?

ABC has been a part of lots of large events in the South St. Paul area, from charity bike rides to months-long events called turnarounds at the local refinery. They’ve worked with several of the same customers throughout their 50 years as an organization, and they know the importance of good relationships with business partners, customers, friends, and family.

When the company turned 25, those customers, partners, friends and family gathered at a local golf club to celebrate. Tim and Rob presented Joe with a plaque commemorating his accomplishment, and the senior Kellner lost his composure.

“He was a very stern German descendant – the idea of ever showing emotion would’ve been deemed an act of weakness,” said Rob. “You got to see what the business meant to him, that he’d taken it from opening and closing the door by himself to one of the pivotal rental stores in Minnesota. It was really cool to see that.”

Joe and Mary Kellner won’t be attending the 50th anniversary, having passed away years ago, but they’ll still be a big part of the festivities. Again, family, friends, long-time customers, and business partners will fit into a building to celebrate the journey of the last 50 years. The Kellner family won’t be the only one taking center stage, either – the White Keys, who will play the event, feature Manager Pam Bibeau’s son-in-law. Family videos and photos chronicling the 50 years of relationships, growth, and love will be featured. Someone might even be presented with a plaque.

And, after the celebration, it will be time to start working toward the next 50 years.

Often in business, rental or otherwise, a family dynamic tears both the family and the business apart. But the Kellners have managed to maintain ABC Rentals’ success from Joe to Rob and Tim, and a third generation is now in the mix, as Tim’s son, Tony, has been with the company in some form or another for a decade.

“This is a business that you truly have to like what you’re doing or you have no business doing it,” said Rob. “But the fact that the community recognizes you, supports you, promotes you, and most importantly, uses you, is unbelievably rewarding.”